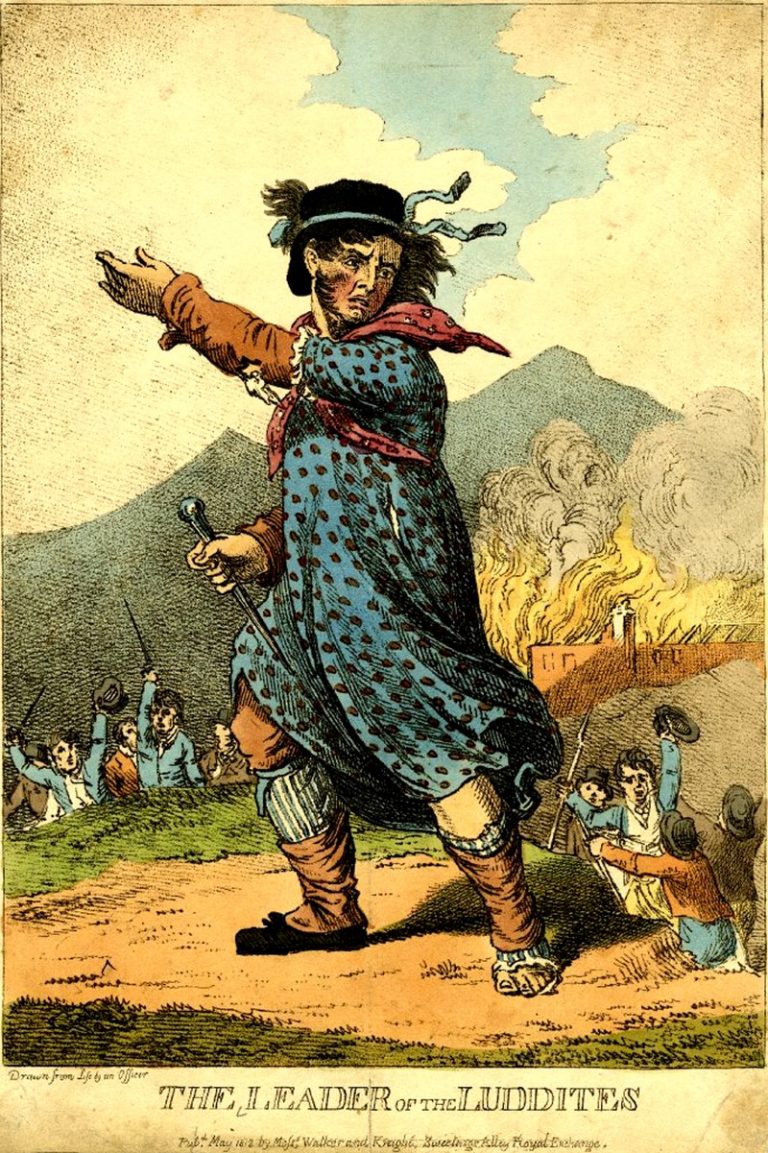 Can it happen again, or just another lesson from the past? What was the Luddite movement, about what did they fight for and what can we learn from it, to do better now? Our vision about this important phenomenon when it comes to fighting for employee interests.

The Luddite movement, originated from dissatisfaction among factory workers, about the industrialization of production in the textile sector. These workers felt they were sidelined when a manufacturer started to automate the production process. Workers were not so much paid a salary for their work, but instead they could keep a pre-arranged part of their production. This used these workers again for barter or direct sales. So, they were small self-employed people within a larger production facility. These days we know this as a self-employed person without staff.

It all started in Nottingham, the group protested the use of machines, at least that’s generally assumed. It was even called by the group as “fraudulent and deceptive ways” how manufacturers would bypass standard working methods and thereby sidelined the worker. The riot movement was at its strongest between 1811 and 1816. Eventually, when factory owners started shooting at the demonstrators, the movement was clamped down with laws and military pressure to comply with these laws.

Who stood behind this movement and its protest actions has never become known? The Luddite had no fixed leadership or structure. Even the name of the movement is still unclear to this day, whether the movement itself has come up with the name, or whether the public and the government have put that name on it. What is certain; several letters have surfaced with factory owners, protesting the mechanization of the production process. In these letters the writers make it clear that they are not so much against automation, but that they fear that their craftsmanship will be lost in the unequal struggle against these machines. The letters were signed with Ned Ludd, later King Ludd or Captain Ludd was also used. Another well-known fact; that at the time of the protests no person by the name of Ned Ludd was ever present, most likely a fictional name. Various stories circulate where that name comes from. In 1811 in Nottingham, where the first actions of the movement took place, 2 stories were published.

The first story was published in December 1811 in “The Nothingham Review” but is said to have taken place in 1779. It describes a Ned Ludd, an (apprentice) weaver from Anstey, near Leicester. After being beaten because of his laziness and being taunted by the local youth, he got into a frenzy and molested 2 knitting frames of his employer. The other story about the possible origin of the name comes from John Blackners book about the history of Nottingham. This book was first published in 1811, in which the writer quotes an anecdote about a young man, Ludnam, who, after his father told him to square the needles for the knitting, the young man took a hammer to hand and hit these needles into a square. We would call it youthful wantonness, but the writer saw this as an act of standing against authority. The fact that the letters were only signed with Ned Ludd, or any variant thereof, from 1812, may indicate that the writer found his inspiration in one of those publications.

Now the Luddite movement is regarded as opponents of innovation and technological automation. But is this association justified? The longer we study this phenomenon, the more convinced we are that it was not a fight against the machines. The source of all discontent must be seen more in the general economic situation in which England, but also France, found itself, as a result of the Napoleonic wars. The country was in a recession due to the financing of these wars. Production focused on the wars; salaries decreased. As we wrote earlier, the workers were not paid in money, but in goods that they produced themselves. Around that time there was also high inflation and very sharply rising food prices. All the ingredients for a significant increase in employee dissatisfaction. It is also important to note that the environment in which this all took place plays an important role. Nottingham, very good storytellers, not really royalists, just look at Robin Hood’s story. A nuance if you want to see the Napoleonic wars as a war waged by kingdoms against the Republic of France.

A time when there were no trade unions, or organized employee interests. What the movement really wanted to achieve was that it would be a fully-fledged discussion partner in the debate about employment and income from work. The mechanization and automation process made it easier for employers to put aside difficult professionals and to put less qualified personnel to work at the machines. They could not expect any support from the government, the government urgently needed the help of the manufacturers, the manufacturers had to produce for the wars, while the manufacturers helped to finance the wars. At the time, as described earlier, employees were paid out in goods, which the government could not collect tax on, so it was not interesting for the government that urgently needed income. One does not bite at the dog that is feeding it in time of need, the government must have thought. Protests have been around for longer for better working conditions. But the manufacturers chose violence as a means to answer this, and when there were actually deaths because this violence resulted in a unilateral armed conflict, people knew that other means were needed to make their voice heard. If they were not listened to and they were driven apart with violence, they would have to defend themselves in groups. The birth of the movement, in which they would use what is now seen as guerrilla tactics. The goal was to hit the manufacturers hardest, there is nothing so harmful to a manufacturer than when its machines cannot produce. So, they went to destroy these machines during nocturnal actions. Which in turn resulted in the movement being able to count on the sympathy of ordinary men and women on the street, but the government’s response came in the form of laws that imposed the death penalty on everything and anyone who damaged or destroyed machines and other factory property.

The only person in “The House of Lords”, the upper house of the British parliament system, who was publicly opposed to this form of abuse of power, was Lord Byron. Probably not entirely by chance that he spent a large part of his youth in Nottingham. It may be assumed that he knew the situation well on the spot. A remarkable fact: Lord Byron was the father of Ada Lovelace, who in turn is considered the first computer programmer thanks to her work for the “Analytical Engine” of Charles Babbage and the “Jacquard Loom. We have already written about this in other publications. His support has in any case ensured that the story of the Luddites is still known.

Another side road that needs to be made to put the story in context even more; Most of the articles that have been written about the Luddite riot mention how they destroyed the knit frames. At the time, these knitting frames were considered to be machines. The first invention of the knitting frames dates from 1589, by William Lee, from Calverton close to Nottingham. This invention is generally regarded as the first step in the mechanization of the production process in the textile industry. This “machine” imitated the hand movements of manual knitters, with the difference that the first “machine” had 8 needles instead of 2, and subsequent improvements to Lee’s invention even included 20 needles. After demonstrating his invention to Queen Elizabeth I, Lee applied for a patent to operate the machine for commercial use. But the Queen rejected the patent for fear of what these machines could cause negative effects for the manual workers who were completely dependent on manual labor. Later, Lee again applied for a patent with King James I, but again it was rejected for the same reasons. William Lee eventually moved to France under the patronage of King Henri IV. There he eventually died in 1614 in Paris. He has never experienced the commercial success of his invention. More than 150 years later, the machine was found suitable for commercial production. Machines are still being made that use its developed technology, mainly for making lace and embroidery.

Throughout history, the textile industry has always been at the forefront of technological innovation. But it has also often been the scene of resistance to these innovations. Watch the story of William Lee, or Barthelemy Thimonnier, or Joseph Marie Jacquard, all pioneers in innovations for the textile manufacturing industry, but none of them have been able to enjoy the benefits of their inventions. Because the moment they presented their innovations, it was not accepted by the environment.

The moral of the story; Communication during the process of innovation and automation is very important. Consider employees as full discussion partners in all work that needs to be done. Not only communication within the different management layers, but also between the different layers, dictating the will of the management downwards probably only works in labor camps.

One of the reasons we are writing about this subject is that we suspect that if market-distorting innovations are introduced and implemented in a production line, it has all the ingredients for a similar uproar. Perhaps not so much in Western countries, there is a good social safety net, but in Southeast Asia and Africa, for example, the opportunity is certainly present. There is really only 1 tool that will work against it, communication during all phases of development. Recognize the value of the staff and prepare them for upcoming changes through thorough training and education.

There is a growing gap worldwide between basic knowledge that is taught in schools and technological developments in the workplace. Governments cannot catch up with the pace at which technological developments follow each other in order to coordinate basic education and training systems accordingly. We therefore welcome the initiatives, as proposed by the Indonesian government, to launch tax incentive programs to enable and promote vocational training by the business community. But we point out that the business community should not wait until the government takes the first step. Better and purposefully trained staff has much more value for a company than any tax incentive can represent.